CrossVegas 2010, the nations largest cyclocross race took place at Desert Breeze Soccer Complex last Wednesday and it was awesome. I was given the chance to be on the setup crew by Mike Olson from VegasBikeRacing.com which gave me front row seats to all the action and the chance to create a few headaches for the racers, see the pictures below to see what I mean. Setting up the course took two days and a lot of work. The race featured cyclocross champions from all over the world like defending Champion Jamey Driscoll, French Champion Francis Mourey, Gerben de Knegt and Lars van der Harr of Dutch team Rabobank,  US Champion Tim Johnson and Czech National Champion Katerina Nash. Check out crossvegas.com for details about the race.

What is Cyclocross? - Cyclocross is a form of bicycle racing that typically takes place in the autumn and winter (the international or "World Cup" season is September–January), and consists of many laps of a short 1-3 mile course featuring pavement, wooded trails, grass, steep hills and obstacles requiring the rider to quickly dismount, carry the bike while navigating the obstruction and remount. Races for elite categories are generally between 30 minutes and an hour long, with the distance varying depending on the ground conditions. The sport is strongest in the traditional road cycling countries such as Belgium, Netherlands and the Czech Republic.

Cyclocross bikes are similar to road bikes except for the tires, brakes and a few other customizations to accommodate for all the mounting, lifting and dismounting.


Many cyclocross courses feature extremely muddy terrain, stairs, steep hills barriers and other obstacles to give racers a tough time. Combine all that with a narrow 10ft wide course and cram over 100 racers into it and you can see what makes cyclocross stand apart from all other types of bike racing.


A poor quality video from my cell but you can see these guys flying around the corner, dismounting, running up stairs and re-mounting all without slowing down. And of course the annoying horns blowing in your face. 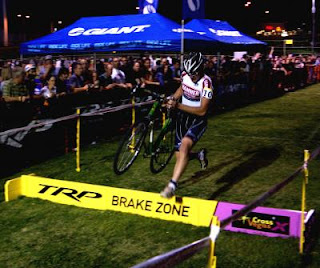 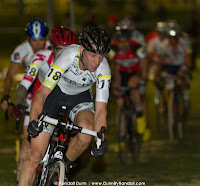