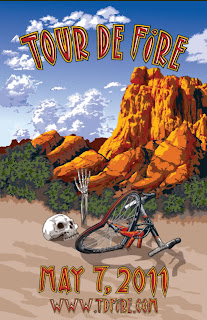 Tour de Fire 2011 turned out to be an extremely challenging day to be on a bike for a lot of riders. The ride started out beautifully, calm winds and relatively cool weather. Flying down hills and storming up them like a champ. It was so nice in fact that I didn't feel like stopping to refill water until I reached the 66 mile half way point. That proved to be a huge mistake.
Training tip #1 - Refuel consistently through the ride to avoid crashing near the end.

Which is exactly what happened. As soon as I turned around at Mouse's Tank in the Valley of Fire at about 10:00am the wind hit me hard in the chest slowing my downhill to a measly 10 mph, and forcing me to pedal to keep that up. That morning I probably averaged 17 to 20 mph and now was fighting to maintain 5 to 10 mph. The second half of the ride was looking grim.

Training tip #2 - If you have a group to ride with, stay with them, you can at least take turns pacing in strong wind.

Starting the climb back to the next rest stop I looked around and couldn't see anyone for miles. I started wondering if the few I had been riding with before had given up at the half way point or were taking an extra breather. A couple miles and what felt like an eternity later, as the wind was relentless, they started creeping up and soon overtook me, I was alone again. Finally getting back to a rest stop I took another break to eat (wishing I had done so earlier that day). It was nearly noon and the SAG vehicles were already busy shuffling riders from one rest stop to the next. Fortunately every one that passed was already full or I probably would have jumped on.

After the break I headed up the next long climb to the Redstone rest stop, finding another group waiting for a ride. I grabbed a hand full of Red Vines refilled water and started the next climb to the Summit. The rest of the ride was more of the same struggle to keep even 5mph at times going up hill and 10mph going down. By the time I got to the Callville Bay turn off I was nearly out of water, not a SAG vehicle in site for the last hour and the next rest stop was a little over 10 miles away. Half my water I had poured in my face to keep from over heating. I had hit the wall.

Then from nowhere another rider passed me gradually so I dropped in and drafted for as long as I could keep up. I'm not exactly sure what time it was by then but it was probably close to 3:30 or 4pm. At this pace there was no chance of finishing by the 5pm course closure. So much of the field had already dropped out that the rest stops were packing up and the wind had forced them to take down the tents.

Training tip #3 - Know your body, if it's not a race (and sometimes even if it is) getting DNF is better than getting injured or sick.

So with 14 miles left in my 133.2 mile ride I had to call in support, and get picked up. It felt so good to get off my bike that any embarrassment that I might have felt for not finishing disappeared rapidly.

Though it might all sound like a terrible experience it was awesome to have all 4 members of Arthur Cycling on a ride together, way to go Laura, one of the few that actually made it back to the starting line still on a bike!

Training tip #4 - If it didn't kill you, it made you stronger....unless it almost killed you then you are probably completely worn out and weaker then before because you didn't stop to take care of yourself along the way or tried to go too far too fast especially if the ride is out and back and the only way to get back is to go back the way you came. 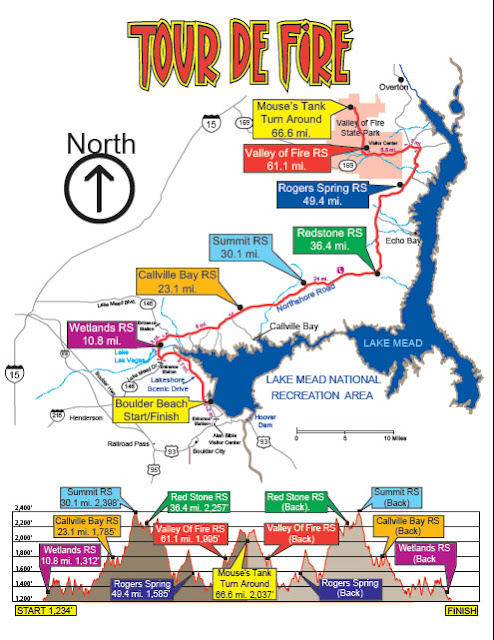