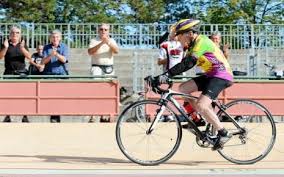 Age hasn't slowed cyclist Robert Marchand.
The 102-year-old Frenchman broke his own world record in the over-100s category Friday, riding 16.7 miles in one hour, more than 2.5 kilometers better than his previous best time in the race against the clock two years ago.

By way of comparison, the current overall world record for one hour is 30.882 miles set by Czech Ondrej Sosenka in 2005.

Marchand, a retired firefighter and logger, also holds the record for someone over the age of 100 riding 62 miles. He did it in four hours, 17 minutes and 27 seconds in 2012.
Marchand received a standing ovation and was mobbed by dozens of photographers and cameramen at the finish line in France's new National Velodrome, a $100 million complex that officially opened its doors Thursday.

The athlete smiled and raised his arms at the finish, supported by two assistants. "It was very good, but at the end it started to become very hard!" he said. He said he couldn't have done it without the public's support. "You have to know there are people who came from 600 kilometers away to see me today! It is incredible. That's all I can say," Marchand said.