How much fun is it to wake up at 4:30 in the morning? It's so great that I'd prefer to stay up all night just to avoid the mostly dead feeling when my FitBit buzzes and my phone's alarm is on the third round of snoozing. But mostly dead is still slightly alive, and so somehow we manage to stand up and do stuff even when our bodies don't want to - and then we start to feel more alive, and if you make it to see the sunrise by a lake shore on a cool morning then that alive feeling just keeps getting better, and if on that morning you happen to be competing in a triathlon and are about to dive into that 68 degree lake, and you're with a ton of other people who are super excited and nervous... you get where I'm going with this. It feels great to get up early. 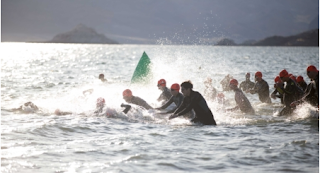 First Tri of the year was the BBSC RAGE and this story starts with wind. It is the windy season in southern Nevada. It's getting pretty warm but not quite like the blow drier wind that will come later. Saturday's wind was cool, with gusts well over 20mph it threatened to turn this one into a duathlon. But with a swim course change that kept us closer to shore we got started early enough that the waves were only intimidating instead of frightening as they became later. I made the mistake of not getting submerged completely before my swim wave started and so as I dove forward to start, the cold water took my breath away. Focus "Left, right, left, breathe, right, left, right, breathe, left, right, left, breathe" quickly becomes "right, breathe, left, right, breathe, left, right breath, ooh that was water not air cough that up and try again." I Turned my head to breath after a couple strokes and I was met with a wave and mouth of water. The waves were so high that I lost sight of the second buoy and had stop several times to make sure I was on the right track. I made it out and as always, when it was over it was hard to believe that I had just done it. 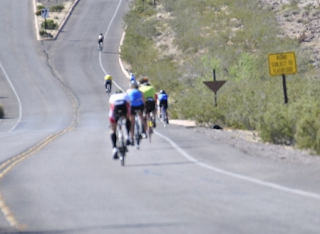 I always feel much better on my bicycle, giving my arms a rest and some time to catch my breath. The cool wind reminded me how wet my tri suit was as I turned right and headed into it but I quickly went to work finding the next person to pass. Competing forces my mind to focus, another of the many reasons to do it. Even though your body doesn't want to, you are driven to achieve a goal and can't think about all the other junk that creeps in during a normal day. All I could think about was, "push the pedal down hard, look forward, make a pass, repeat." After being passed by so many swimmers the bike is my turn to do the passing, and it feels good. Sometimes I come across another athlete who doesn't like the idea of being passed and a game of leapfrog begins, which is even more motivating.

There is an interesting dance that happens at the end of the bike segment, it is a combination of trying to be fast right up to the dismount point and getting both feet out in time to not fall over. Until I get some smoother transition bike shoes I'll probably continue to almost fall over every time. "Ok, loosen the left, pedal once, slip your heel out, loosen the right, pedal once, take your left foot out and as soon as it hits the ground pull your right foot out leaving your shoes clipped in so you can run barefoot through transition," but it usually doesn't happen that way. "Fine this time keep your shoes on, just unclip and clomp your way to your spot."

I have been running more recently. Earlier this year I started to actually practice swimming and running. Not consistently enough to have an amazing finish yet but at least enough to feel a difference. There was even a point during the run that I thought, "this is a pretty good pace but I bet I can go faster," and I did, and when I started hearing footsteps behind me I found my focus, "sorry not passing me this time."

It was a good feeling to be done with the water, wind, dust and heat. So good that I might just get up at 4:30 again and do it all over... next month in St. George.