June 15, 2016
Must be the end of my day, the sun has made its way to the top and was beating down so hot I could not touch the rock. So I took one last rappel and sat in the shade for a spell resting my head and my swell and soon started to sleep for well until the day grew cooler and appeared more lunar.

As my eyes flickered shut I laid my head on a stump under the shade of a juniper tree. I glimpsed the last trail of my own shadow disappear as if passed behind a mirror reflecting the juniper's shadow off the red sandy stone floor. No I couldn't ask for more, it was peaceful and restful laying on that rock no shoes no sock and no talk. Just quiet. Time passes. After I stirred I observed how the juniper's shadow had swerved when the sun grew lower stretching out all the shadows below her. But where was mine? I held up my hand and sat up to stand and my shadow was gone. I looked all about and counted everything out: harness, rope, draws and shoes, cams and nuts, runners and carabiners, even my helmet but no shadow was cast by my body now up like a mast. Quite a problem I've never had, though I don't know if it's actually bad to be missing a shadow, did it go back home to Colorado? 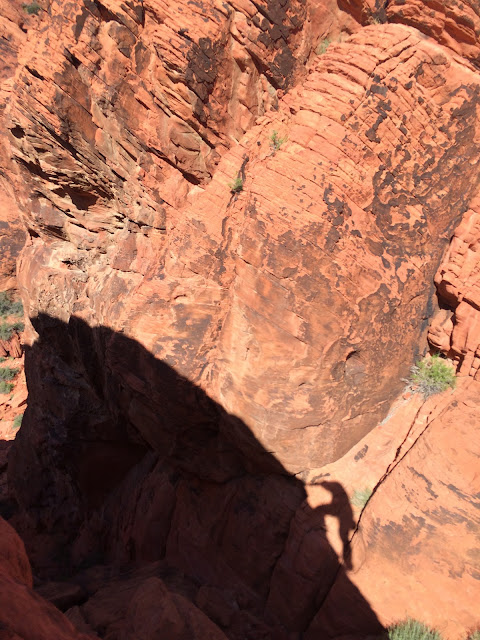 I heave a sigh and looked up and to my surprise I was struck. It was there all along climbing the wall this whole time while I had sleep on my mind. Weighing no weight at all it moved with such skill, climbing backwards and upside down I would have been ill. But as I saw it descend one more time to the end of our favorite pitch it appeared unhappy, I'd say it even frowned and looked down. What could be so wrong you've been so free to climb with no troubles it seems. Then my shadow came closer  until we stood feet to feet and I realized something. To climb without inhibition, with full freedom and skill, to climb the extent of your will with no danger is still little thrill unless you're there with another who can give you some cover and share in your ware and care for your ...hair. Climbing is best when shared with another. So next time you think it, take the time to invite, with others you'll have a much better hike and climbs will be sweeter, when you descend and she's there for you to greet her.