Since daylight savings time ended (why do we still do this?) we've all noticed it getting dark a lot earlier but undeterred I took the chance to go for a run after finishing up work one day, headed to the nearest Strava segment I found and set off in an area called Short Springs. 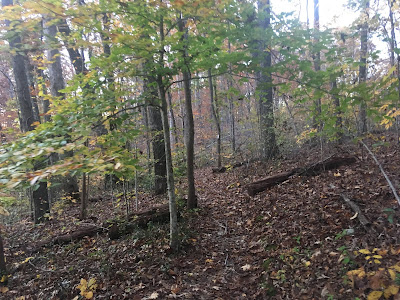 The trees and plants being so densely grown and the trail covered completely with leaves made for some slow jogging. I was alone, it was quiet except for the sounds of my feed padding against the ground and some deep breathing. Living in the Mojave Desert has made me appreciate any opportunity to experience a different climate, especially one with so much water. 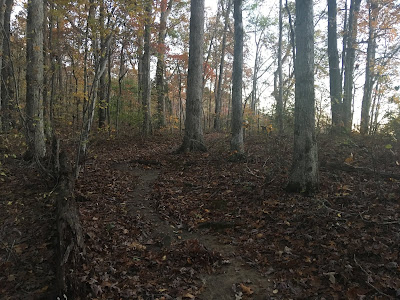 After about 1.5 miles I paused to listen to the increasing sound of rushing water and to make sure I hadn't left the trail. A sign labeled "Connector" marked a fork, "a connector to what, I thought?" Well there was only one way to find out so I went to the right. Another half mile in and I saw the falls. Bobo Creek running over Machine Falls and smacking hard into the limestone below. It was a nice picture, I looked down to realize that I was standing on a very steep bluff with edges obscured by trees and bushes.

About a quarter mile later I came to another junction, to the left going down probably to the waterfall below and to the right another loop I assume. I went left wanting to get some pictures of the waterfall before it was too dark. 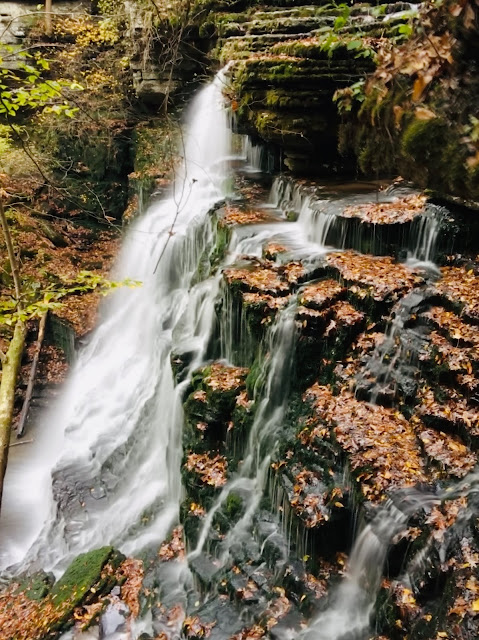 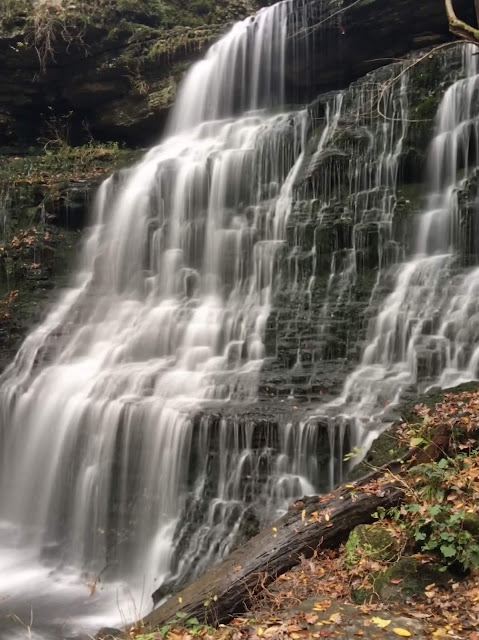 I later followed the river and until it came to a junction where the trail turned again. By this time I wasn't sure which way to go and I looked up to see the last traces of the sun disappear behind the hills. Looking at my Garmin I saw that I was about 2.5 miles into what I had hoped to be a four mile run, I didn't want to turn around but realizing that it would probably take 20 minutes or more to find my way back and that there was only about 10 more minutes of light left I decided to... go a little deeper, there had to be another impressive waterfall ahead. 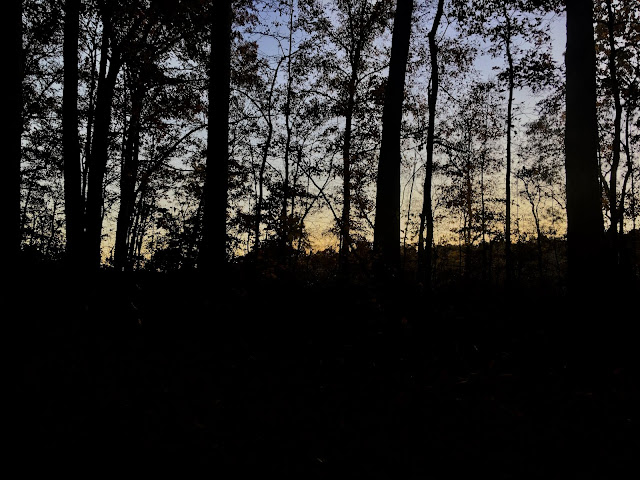 Well there wasn't, or at least I didn't find it. Later I decided that continuing down the trail was a mistake. Now it was dark, the damp leaves covered the trail obscuring it almost completely and the many hidden roots and slick rocks slowed my pace considerably. If it wasn't for the painted marks on the trees here and there I might have missed the trail completely. So I turned around. I was never in any real danger of getting lost. The rivers and a road made a nice boundary so within a few miles in any direction I could find where I wanted to go, even in the dark. The real danger was slipping, tripping or twisting an ankle, so I decided to walk.

I couldn't help but pause for a moment when I was nearly out of the woods. There was not enough light to produce any shadows but the dim silhouettes of the trees around me were still visible. I pulled off my sweatshirt and stood still for a while to appreciate the quiet and damp air - the peaceful solitude.